All Aboard Amazing! Experience our luxury rail journeys in the Canadian Rockies and the American Southwest and save $200 per couple. 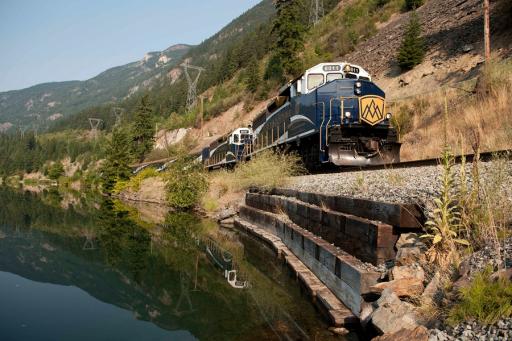 Are you more of a history buff, or a wildlife watcher? Do you yearn to follow the route of gold-seeking pioneers of the 1860s, or is spotting a soaring eagle or a handsome bear top of your list? Canada’s luxury train company, Rocky Mountaineer, offers three distinctive rail routes connecting the Pacific city of Vancouver with the Canadian Rocky Mountains. No matter which you choose, as you sink into your roomy reclining seat with a glass of wine, you’ll enjoy an inspiring mix of nature’s greatest hits, storytelling that brings your surroundings to life, and Rocky Mountaineer’s legendary service. 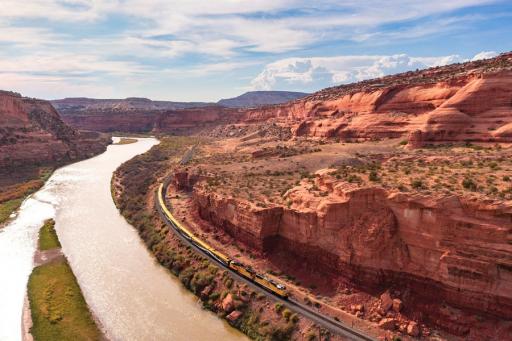 Rockies to the Red Rocks

Experience the American Southwest by train on Rocky Mountaineer’s newest route, Rockies to the Red Rocks. From vast canyons and chromatic deserts to red sandstone landscapes that twist through the bright blue sky, this stunning rail route is filled with highlights best seen from their expansive glass-dome coaches. The breathtaking scenery is complemented by vibrant storytelling, regionally-inspired cuisine and impeccable service. Get the sense of adventure you crave, with the exceptional service you deserve on this journey of a lifetime.

First Passage to the West

The two-day First Passage to the West route rolls along the historic tracks of the country’s first coast-to-coast railway between Vancouver and Banff or Lake Louise, with an overnight stay in Kamloops.

Pass by the snarling rapids of Hell’s Gate—named for explorer Simon Fraser’s assertion that “surely these are the gates of Hell”—and the twin rail bridges of Cisco Crossing. Between Kamloops and Banff, you’ll witness the site of the “last spike” driven into the Canadian Pacific Railway in 1885 at Craigellachie, and experience the engineering marvel of the Spiral Tunnels. As you travel through Banff National Park be awed by views of towering Castle Mountain and Mount Rundle.

Journey through the Clouds

Also two days long, Journey through the Clouds travels between Vancouver and Jasper, traversing some of the most remote landscapes in Canada, with scenery and wildlife largely untouched by humans. Like First Passage to the West, the rail route passes the rushing Hell’s Gate and Cisco Crossing, travelling along both the Fraser and Thompson rivers. Between Kamloops and Jasper, the train passes the glacier-fed, three tiered Pyramid Falls; Mount Albreda; and Mount Robson—the highest peak in the Canadian Rockies at 3,954 metres (12,972 feet). Mount Robson is so big that it often forms its own weather patterns, with clouds enveloping the peak while the rest of the sky is blue. Jasper National Park is a Dark Sky Preserve known for stargazing, wildlife around every corner and some of the best outdoor adventure in the Canadian Rockies.

For those that want to delve further into Western Canada’s history and diverse landscapes—as well as spending more time on the train—the three-day Rainforest to Gold Rush route takes a northerly path between Vancouver and Jasper, uncovering the stories of those seeking their fortune. This rail route also boasts the most trestle bridges, making it a favourite with train fans. With overnights in Whistler and Quesnel, on this journey you’ll climb through rainforest into the alpine alongside the southern fjord of Howe Sound, pass the deep turquoise waters of Seton and Anderson lakes, travel along the desert like Cariboo Plateau, cross the historic Cottonwood River Bridge, and take in Mount Robson. With two of Western Canada’s best outdoor adventure hubs on this train journey, Whistler and Jasper, this rail route is the perfect fit if you love exploring nature.

Every Rocky Mountaineer rail journey travels only by daylight so you can be sure that you’re not missing a moment of those landscapes that you’ve come to see. And whether you opt for SilverLeaf Service or GoldLeaf Service, you’ll enjoy freshly-prepared cuisine paired with local wine and craft beers, as your onboard Hosts bring the scenery to life, and you make new lifelong friends.

Each train journey can be travelled in either direction. Can’t decide which journey is for you? Combine two rail routes for a Circle Journey, or even pair your rail adventure with an Alaska Cruise. Rocky Mountaineer works with local tour operators and travel experts to curate custom packages that feature tours, activities and extended stays in the destinations, so you can experience even more of Western Canada.

Ready for an Adventure? Contact a Travel Agent Today!

“Final Call” (“Offer”) applies only to new bookings on packages (including 2-day and 3-day rail) to travel in 2022. Booking must be made between April 30 and June 30, 2022 to qualify. Offer is per person and applies to single, double, triple or quad occupancy bookings, and will be automatically added to booking. Offer can be combined with any other in-market offer, unless specified. Offer has no cash value, is non-transferable and cannot be deferred to a later trip unless specified. Offer is not applicable to Custom Groups or Group Tour Block bookings. Offer is capacity controlled and may be modified, withdrawn or amended without prior notice. Deposits are required at the time of booking and full payment of the balance must be made 60 days prior to travel. All figures advertised are expressed in USD as a guideline only and may vary at the time of booking based on changes in exchange rate with the CAD for our Canadian routes and USD for our US route. Value of Offer is per couple. All bookings are subject to the full booking terms and conditions which are available at rockymountaineer.com. Additional conditions apply..